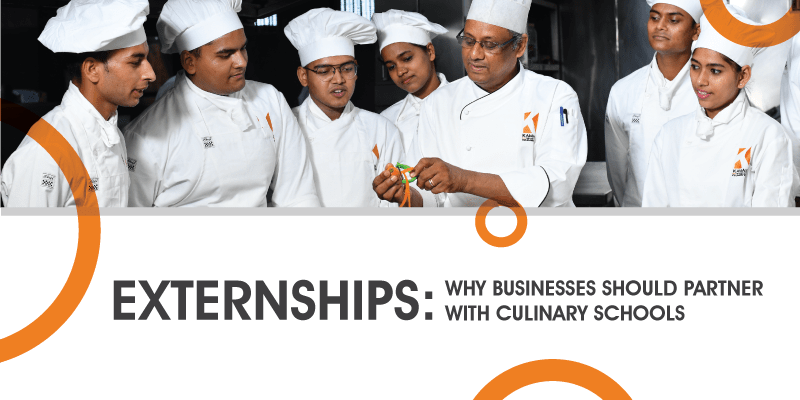 For culinary entrepreneurs and hotel management students, so much of their initial work experience lies in what they were exposed to in college. Businesses unfortunately only consider internships when hiring new staff, but externships can also create valuable employees.
So what exactly is the difference? During an internship, a student is given the opportunity to do projects or tasks, coordinate with other team members of the company, take part in staff meetings, basically be part of the organisation. An externship on the other hand is mostly observational, where the student absorbs as much information as they can about the working of the organisation.
In the culinary world, an internship might mean a few months at a bakery, in a kitchen, mostly low-tier posts that give students an insight into the deep end, the starting point. An externship exposes students to the top end. It’s rather short compared to an internship – maybe a day or a week, but allows them to shadow higher management, tour company facilities, sit in on staff meetings, review company literature and maybe even speak to staff and managers at various levels.
Externships are unpaid, unlike some internships. And while both provide value, it’s important for businesses to partner with culinary schools to get the best out of each. Allowing students to extern raises the standard of the industry, even at an entry-level position. By partnering with a culinary school, businesses can offer consistency in externships. All students will have the same foundational knowledge and will have been exposed to the same curriculum.
Through externships, students are better able to understand the various sections in a culinary establishment, allowing them to apply for jobs within those sections rather than simply trying things out since they’re eager for a first job. For businesses, this means employing staff who are aware of the direction they would like to go, are keen to move forward and already have an idea of what it looks like from the top down.
Another key benefit from partnerships between culinary schools and businesses is savings in terms of training staff. One of the biggest problems that restaurants and other culinary ventures face is finding good staff. It costs a lot of money to train a new employee, and even more if they leave within several months. With highly acclaimed culinary B-schools such as Kamaxi College of Culinary Arts, businesses receive industry-ready employees who already understand the working of the company well thanks to externships.
Externships also allow students to gain a deeper knowledge of the day-to-day responsibilities at managerial positions – from team manager, executive chef to CEO. They have the opportunity to ask questions they might shy away from during an internship, or make objective observations of meetings and the functioning of the company.
Businesses must realise that partnering with culinary schools only serves the future of the industry. Together, they build a vibrant work environment and culture where management is vested in the welfare of staff, new employees work efficiently towards the growth of the company and entrepreneurs chase their dreams with passion.

Pandemic Perspective: An Optimistic Look At The Future Of Hospitality