What’s Brewing: A Peek Inside Your Coffee Cup 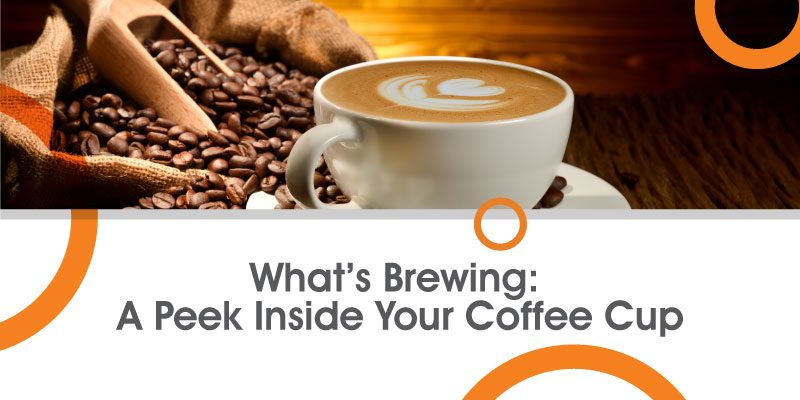 Globally, more than four billion cups of coffee are consumed each year. The tiny bean discovered in the horn of Africa and south Arabia back in the 15th century today supports more than 25 million farmers and is the world’s second-most valuable commodity exported by developing countries after oil.

With the global coffee market valued at approximately US$102.15 billion in 2019, and growing, careers and entrepreneurial ventures in the industry look promising. It helps for anyone, from organic farmer, barista, coffee connoisseur to bean mogul to know what defines a good brew, the top brands in the market and how to identify ethically sourced coffee.

You’ll find the vast majority of coffee connoisseurs stay away from lacing their brews with milk, cream or sugar. These additions usually mask flavour nuances and can distract your taste buds.

Coffee aromas are largely divided into three categories: enzymatic, sugar browning and dry distillation. Like wine, these divisions help identify the bean’s place of origin and the aromas are usually activated during the roasting process.

Professional coffee tasters are also known as cuppers. During a tasting session, they examine the aroma, acidity, body, flavour and aftertaste to determine where the coffee is from, how it was roasted and brewed, how it feels, its flavours, and any lingering changes in the aroma. Budding cuppers can use the taste wheel developed by the Specialty Coffee Association as a flavour reference during practice.

Coffee tasting sessions usually have three ‘smell’ stages before the actual tasting. The first is the smell of freshly ground coffee, the second after hot water is poured into the cup and the grounds steep for four minutes and the third when the grounds are pushed away to reveal more layers of complexity. Finally, the coffee is sipped slowly.

The story of Indian coffee goes back to the 1600s, with commercial plantations cropping up in the 18th century. Today, coffee in India is more than hopping on to a Dalgona trend. The obsession with instant has long died and enthusiasts are looking at sources.

Tribal women are the mainstays of Araku Coffee, run by the Naandi Foundation in Andhra Pradesh. Black Baza Coffee is also a 100 per cent farm-to-table bean, while the House of Halli Berri is a sustainably-run farm by four Kodava women. Nandan Coffee is an award-winning organic brand in the Kodaikanal Wildlife Sanctuary. Other notable artisanal brands from India include Dope Coffee Roasters, Koinonia and Blue Tokai.

Today, Indian coffee is largely grown in one of the world’s most ecologically sensitive regions – the Western & Eastern Ghats. Quality coffee must be grown in cool climates, under the shade of trees on steep slopes, and pollinated naturally. Deforestation to expand farms causes soil erosion, water loss, sedimentation of water bodies, and the need for chemical pesticides which adversely affect the flavours and quality of the product.

With thousands of livelihoods dependent on this industry and innumerable species depending on the region, the need for sustainable cultivation has never been more important.

How To Prepare For Culinary Job Interviews

Why Every Restaurant Must Have A Kitchen Garden