Exotic Ingredients From Around The World (Part 1) 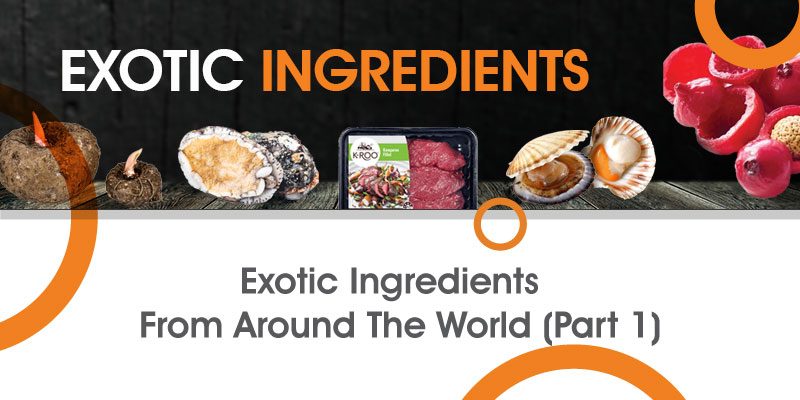 Being a chef, restaurateur or foodpreneur can involve experimenting with a wide variety of ingredients. Understanding flavour pairings can help the evolution of new dishes, a prospect that is inviting to food lovers. It works to every budding chef’s advantage to try out new ingredients whenever they get the chance. This series will introduce you to ingredients fairly uncommon in most Indian kitchens.

Also known as elephant yam, Konjac is native to China and fairly common in parts of southeast Asia. In Japan, it is often cut into noodles and is common as a thickening agent in the form of flour and jelly. Its salty, fishy flavour makes it an ideal plant-based substitute for seafood dishes.

These marine snails are found in the cold waters around Australia and New Zealand, South Africa, western North America and Japan. They’ve been a part of the human diet for centuries, with farms cropping up in many countries around the world. Its sweet, salty and buttery flavour lends itself well to raw dishes as well as steaks and pan-fried versions.

Found mainly in Australia, saltbush is an incredibly versatile herb. Known as purngep or binga in indigenous languages, the leaves have been used as skin cleansers as well as in food. Today, they’re excellent fresh additions to salads, stir-fries, meat marinades, or dried as seasonings. Their flavour makes them a great substitute for salt.

It’s a superfood in Australia’s harsh outback, consumed fresh or dried by Aborogines for tens of thousands of years. Also called the desert peach, it can be preserved for up to eight years with its slightly sour, salty and sweet flavour bringing beautiful tangents to savoury curries and desserts alike. The fruit can be stewed for pie fillings or juiced, while the seed is used as herbal medicine for tooth and gum aches.

Scallops are large saltwater clams that are found abundantly along Indo-Pacific coastlines. Both the meat and the roe – also called the coral – are eaten baked, fried, raw, in soups and steamed. Their mild taste works quite like lobster or oysters – a mixture of sweet and buttery with a slight nutty flavour.

This is another food source from Australia that is crushed into a powder and used in cooking. It lends an aroma and taste similar to coffee and is used in savoury and sweet dishes. Wattleseed is a nutritious grain borne by acacia trees, many species of which are poisonous. Edible wattleseed is used as a spice and is commonly available across Australia in bread pre-mixes, chocolates, ice creams, granola and mousse.

Kangaroo meat is very high in protein but has just two per cent fat, making it the perfect protein for those suffering from heart disease. Its low fat content means it should be cooked either slowly over low heat or stir-fried quickly. Kangaroo meat is imported into India and even found its way onto the menu at renowned restaurant Estella in Mumbai.

Behind The Scenes: The Cruise Ship Chef’s Table