7 Goan Dishes With Links Around The World 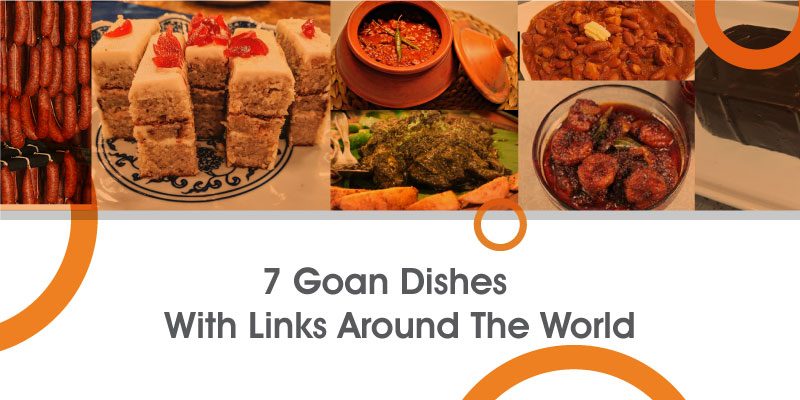 Goa is incredibly multi-cultural. While local traditions have been influenced for centuries by the ruling population of the Kadambas, the Deccan Muslims, the Vijaynagar empire and those led by Adil Shah, a major impact on its culinary heritage occurred with the foreign invasion.

The Portuguese carried with them the culinary traditions of many of their colonies around the world, which Goa has assimilated into its own foodscape and created dishes that are unique in their own way.

Feijoada is a Brazilian bean stew with beef and pork usually eaten with rice. It is thought to have developed amid Roman conquests, with similar dishes seen in France (cassoulet), Spain (olla podrida) and Romania (fasole cu carnati). It came to Goa and took on a spicier flavour, often boosted by the addition of local sausages cured in palm vinegar. It is enjoyed with rice or local bread.

Where this incredible dessert originated from is hotly contested. It is thought to have come to Goa via Portugal from France, given that its name means cake (bolo in Portuguese) without rival (sans rival in French). Cashew nuts were more easily available in Goa compared to the original almonds, and later editions included buttercream between layers. As far as cakes go, this rich dessert is one of the best in Goa by far.

Cured and smoked meat has a place in most cultures, particularly in warmer climates where food decays quickly. The Spanish chorizo is slightly different from the Portuguese chouriço in that the latter version is usually spicier. Linguica is similar but is spicier, usually has more garlic and is smoked. In Goa, sausages have a distinct flavour of local toddy vinegar while some cooks even add coconut feni. It is often smoked over a wood fire and then dried in the sun.

Some culinary experts believe that cafreal came to Goa from the Portuguese colonies in Africa. If not, it’s altogether possible that this dish is uniquely Goan. The amalgamation of fresh coriander leaves, green chillies, onion, garlic, ginger, a variety of spices and lime juice or vinegar marinate whole chicken legs to create a spicy dish popular in bars and tavernas.

Sorpotel is considered a corruption of the Portuguese sarapatel and exists also in northeastern Brazil. It is popular in Goa, Mangalore and among the East Indians in Mumbai, although each of these add their own peculiar twist to this dish. Many chefs prefer to use meat rather than offal and pork blood as traditionally used (today only liver is added with the meat), and use toddy vinegar. It is best eaten with sannas.

There are theories that this fiery meat pickle came to Goa from Malacca but there may not be any clear manner of confirming this. It’s certainly an adapted dish since both the tomato and the chilli that make its base were imported into India. Traditionally, cooks used a paste made of dried shrimp (galmo in Konkani), but today fresh small prawns, fish and pork are used too.

Versions of this dark, sweet treat are found across SouthEast Asia where its main ingredients – coconut milk, jaggery and rice flour – are in abundant supply. The name is derived from an Indonesian language from where it is presumed the confection originated. In Tamil Nadu, it is called kavuni arisi halwa or black rice halwa while Goa has retained the original word.

How To Choose The Right Restaurant Vendor